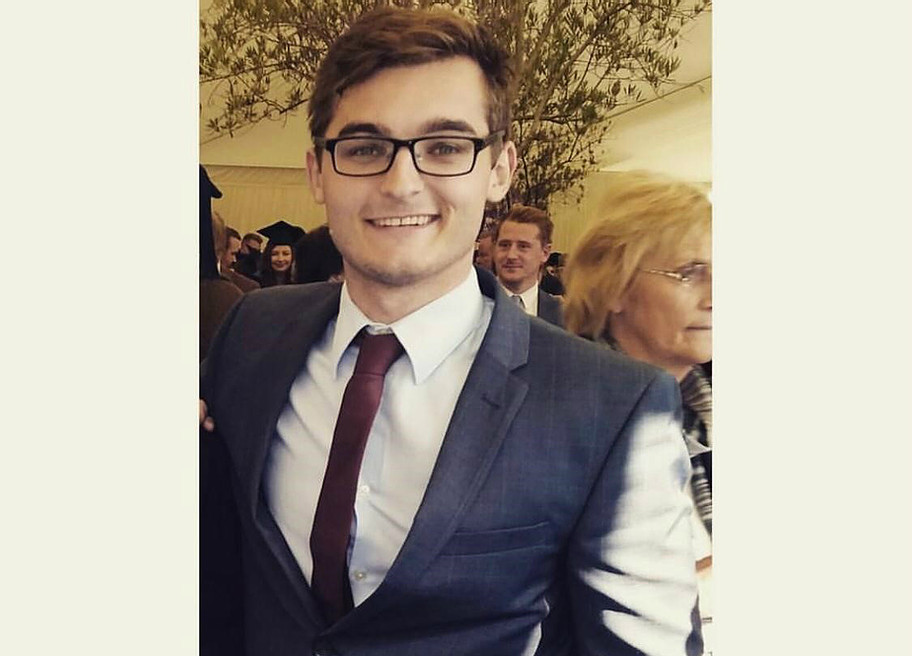 Did you know that suicide is the biggest killer of men up to the age of 49 in the UK? In his blog, Suffolk-born military intelligence analyst Joe Tyrrell talks about his struggles with mental health while being in the army. ​

“There’s a certain perception of being in the military. It’s a male-dominated industry in which you are expected to be in peak physical and mental condition at all times.

“It never occurred to me for a second that I would become victim to mental health issues.

“In all honesty, I never really understood it. I’d had a few friends go through some awful periods of low moods and I always tried to be supportive.

“It was just never something I thought would happen to me.

“I’d always assumed that mental health issues only came about if something tragic happened, but I realise now this isn’t the case.

“Last year, I obtained a pretty serious injury to my ankle which prevented me from doing any exercise. As someone who was in peak physical condition, I gained weight quickly and things went into a downward spiral from there.

“Not being able to do my job as well as I could started to affect me and I began to have some horrible thoughts in my head.

“I thought I was worthless and a burden. I never spoke up because I thought I was being over-dramatic. I couldn’t sleep – I’d maybe get 1-2 hours a night for weeks and I stopped taking care of myself.

“I completely shut down. I made silly mistakes at work – and these mistakes only added to the reasons I thought I was absolutely worthless.

“It wasn’t until my sister asked me what was wrong that I actually talked about what was going on. She helped me write a letter to my boss and I got booked in to see a doctor the very next day.

“The initial appointment was tough. I went back to my room and cried for two hours – I’d been diagnosed with major depressive disorder, anxiety and insomnia.

“I was the lowest I’d ever been.

“At that point I wrote a note, telling my loved ones how much they meant to me and apologising for what I was about to do.

“As if by some sign, I’d written this note on the back of a mental health support pamphlet I had been given at the appointment. I rang the 24/7 support number.

“A lot has changed since that call – nine months of stuff to be precise.

“The army were absolutely incredible in getting me the support I needed. The treatment and the understanding I received from them was amazing.

“I’m on medication – they’re not magical but they are really working for me. I’m in such a better place I can’t even describe it.

“Did you know men are three times for likely to take their own life? I nearly became a part of this statistic.

“I’m speaking up because we need to break this stigma of ‘manning up’ and being ‘tough’ as a man. In the army especially, where there’s a lot of the macho, keep your head down and march on kind of mentality.

“Talk to anyone. Just make sure you speak up. Break the stigma.” 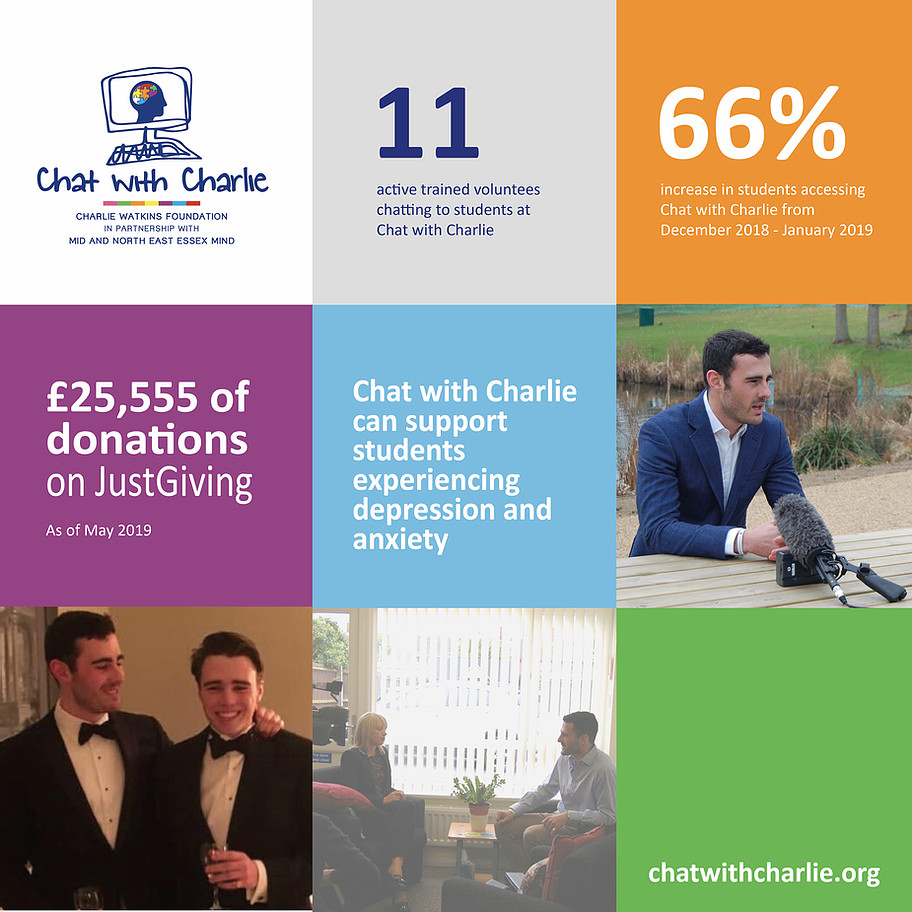 Mental Health Awareness Week in 2019 marks one year since Chat with Charlie expanded to a seven day-a-week service.

Chat with Charlie, an online mental health service based at the offices of Mid and North East Essex Mind, is open to all students who study at the University of Essex. It offers a platform in which students are able to chat anonymously to trained volunteers via an online chatroom.

The service was initially launched as three days a week on the first anniversary of Charlie’s death. The response was phenomenal and showed that there was a need for an anonymous platform where young people can safely talk about their troubles without judgement.

To mark the achievement the Charlie Watkins Foundation (CWF), Mid and North East Essex Mind and the University of Essex has achieved since Chat with Charlie became a seven-day service, CWF has put together the below infographic.

The key statistic on this infographic shows that there was a 66% increase in students accessing the service from December 2018 – January 2019. It is a remarkable achievement showing that the service has been beneficial to students, particularly those suffering with depression and anxiety.

Thanks to the Essex Community Foundation and Mid and North East Essex Mind, CWF is now in a position where the service being rolled out nationwide is becoming a possibility.

It is because of the generous donations on the Charlie Watkins Foundation’s JustGiving page that this been possible. An amazing £25,555 has been raised from friends and family of the foundation.

The foundation also has some amazing volunteers who go out and do some incredible work to raise money.

The foundation would like to thank everyone who has been involved since its inception. It’s a huge achievement to have Chat with Charlie as a legacy to Charlie and if just one person is helped, it has all been worth it. 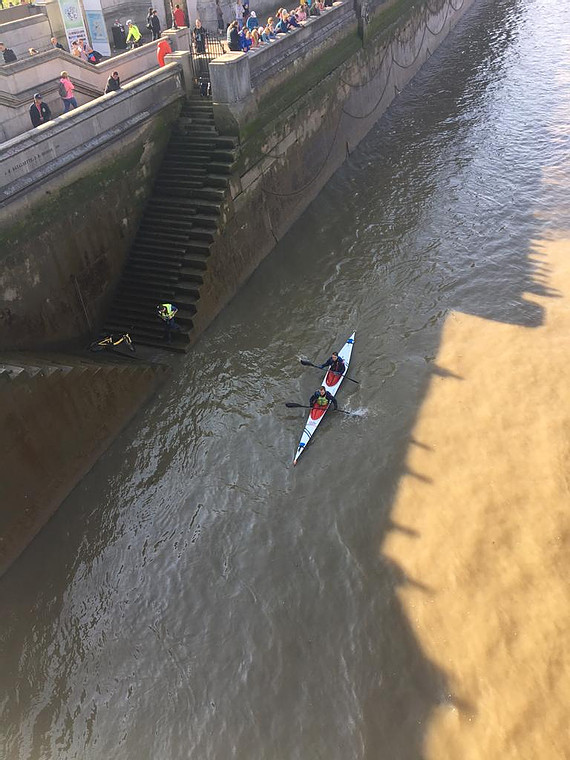 Two friends have taken part in a 125-mile long kayaking marathon for two charities very close to their hearts.

Now recovered from his rowing exerts, Oliver has given us a snippet of the experience:

“Saturday for us and the support crew started at 0400 – so not very enjoyable.

“We got onto the water and started our epic paddle at 0658 with sun in our eyes and looking forward to getting one heck of a sun tan!

“Throughout the day we made good progress and even with 29C recorded in Newbury, we managed not to go down with heat-stroke and crack on.

“70 miles in and the night took hold. Temperatures plummeted to zero and it all became rather uncomfortable.

“Exhaustion, fatigue and the cold and wet conditions took effect which made the night paddling rather painful.

“Navigating the larger parts of the Thames became rather difficult with fog rolling on the water so all in all, it was not as enjoyable as the day-time paddling.

“At 0520, the light started to come back and with five miles to Teddington, we knew we had roughly 21 miles left before finishing.

“We met our amazing support crew at Teddington which is the final lock – we took on food and water, were given some emergency supplies and set off for the final 17 miles of the race along the Tidal Thames.

“A rather painful and lonely two hours later and we entered the centre of London and, shortly after, we could see our goal of Westminster Bridge and FINALLY… finally, at 0920, finished.

“Totally exhausted and broken we had accomplished our goal.” This year’s race was dubbed one of the hardest in its 71-year long history due to the high day-time temperatures.

And, out of the 145 boats that started the race, 31 did not finish. Oliver and Matthew’s final position was 77th out of 114 with a time of 26 hours and 20 minutes – a phenomenal achievement.

The pair are incredibly close to their £5,000 target. Please give generously and help them hit their milestone.